Marangu Route – The Only Kilimanjaro Route with Hut Accomodation

The Marangu Route, also known as the "Coca-Cola Route" or "Tourist Route", is the oldest on Mt Kilimanjaro and is also one of the most popular – mainly because it is the only route on the mountain that has hut accommodation for hikers. There are 60 bunk beds each at Mandara and Kibo Huts, and 120 bunk beds at Horombo Hut.

Typically tour operators provide mattresses and pillows for climbers (sleeping bags however, need to be brought separately by trekkers).

Here's our complete guide to the Marangu route.

The Marangu route can be completed in 5 days; however, it is recommended that climbers take an extra day to acclimatise at Horombo Hut.

The main setback on the Marangu Route is that the ascent is exactly the same as the descent and therefore there is not as much variety in settings compared to other routes. It also means that the route can get very crowded.

The Marangu Route success rate also tends to be low as it is usually chosen by inexperienced and unprepared trekkers who are misled to believe it is the easiest route on Kilimanjaro. See Kilimanjaro success rates. 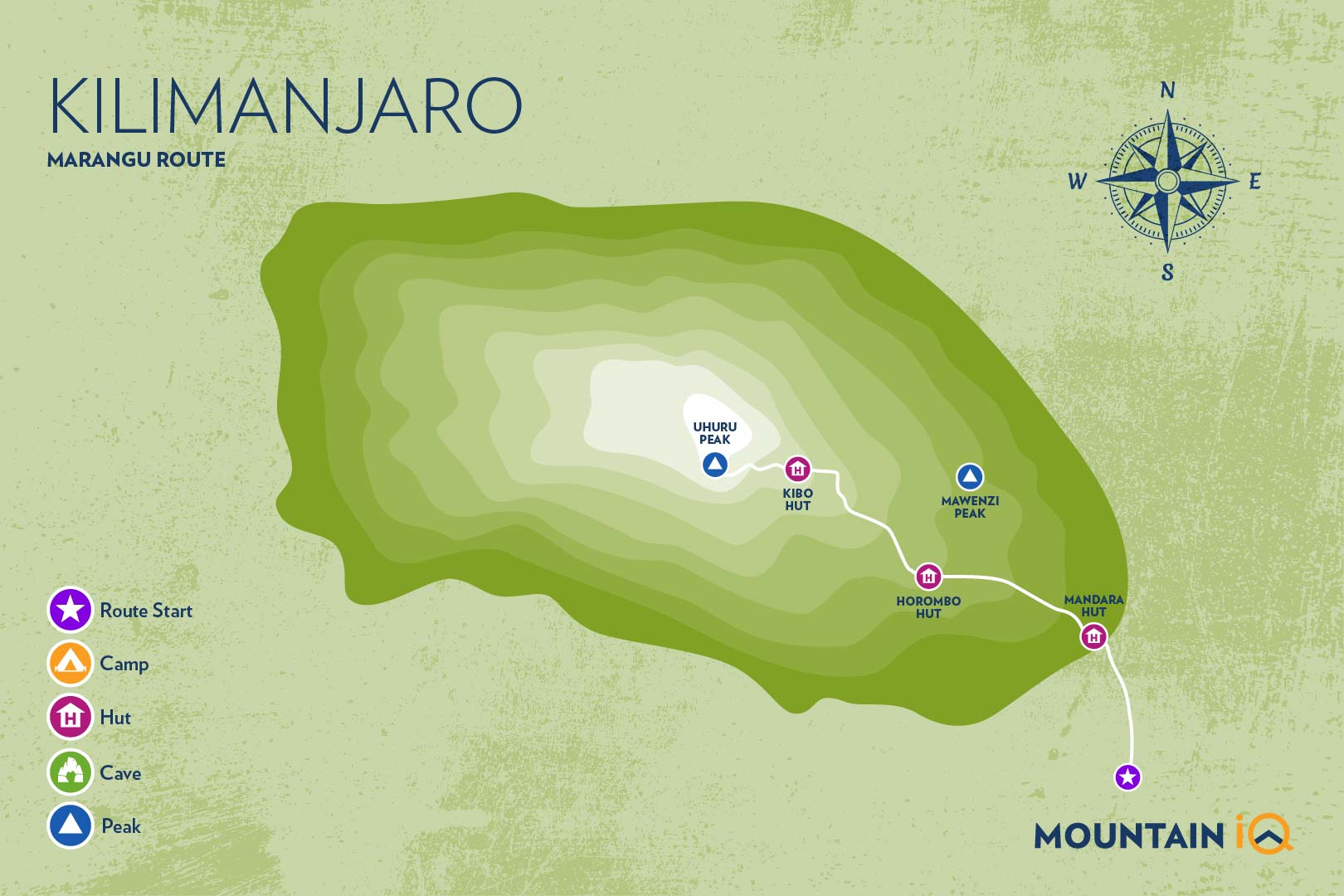 Below is the typical itinerary for an 6-day Marangu Route.

The Marangu Route begins at Marangu Gate (1,870 meters) on the South-East side of Mount Kilimanjaro (see map above). Typically you will be driven to the gate from Moshi, which takes approximately an hour and passes through the village of Marangu. If approaching from Arusha it takes over two hours to reach Marangu gate.

At the gate you will meet your trekking team, register with the Kilimanjaro National Park authorities and witness porters assembling and weighing packs of gear that they will be carrying up the mountain. Day one is a gradual trek through the Kilimanjaro rainforest and takes 5-7 hours to complete. 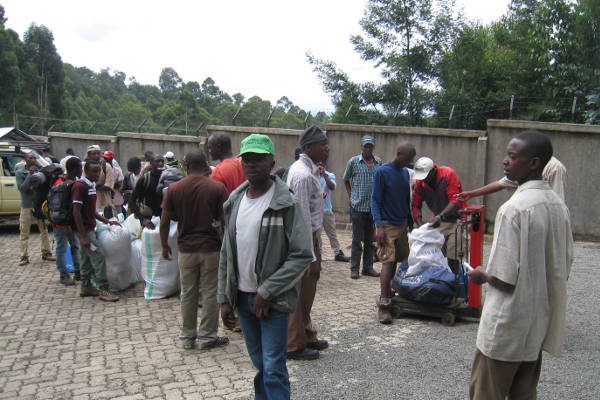 Your first night is spent in the Mandara A-frame Huts (2,700 meters) which come equipped with solar generated lighting, flush toilets and water piped in from a nearby mountain stream. Each hut has 6-8 bunk beds. If you are a light sleeper we suggest bringing ear plugs!

Day two on the Marangu Route begins with an early start. You will be served breakfast and should be on your way by latest 08:30.

The trek continues through the rainforest, around the base of the Maundi Crater and then transitions rather rapidly into the low alpine moorland zone.

If the weather is clear you should definitely take the opportunity to scramble up the Maundi Crater to get your first full view of Kibo.

During the trek you will also see giant lobelias which are scattered throughout the landscape at this altitude. Day two takes approximately 6-8 hours to complete and covers a significant distance (11.5km / 7miles).

At Horombo Hut (3,720 meters) you will be served dinner and shown to your sleeping quarters for the night.

This is an important acclimatisation day at Horombo. Most tour operators will take hikers on a hike towards Mawenzi. This is a 3 hour hike up and about 1.5 hours back. We highly recommend it as it will assist with acclimatisation.

You will depart from Horombo Hut early and begin a 1,000 meter ascent to Kibo Hut which covers a distance of approximately 10km.

There are two routes to Kibo. The first, or upper route, forks to the right. Six day trekkers would have trekked this route on their acclimatisation day to Mawenzi Hut. You will most likely take the lower left hand route as it is easier and nearly an hour shorter. On the left hand route you will pass the last water point at 4,130 meters.

Make sure to fill up your water reserves here as you will not find another watering point until you get back to Horombo Hut from the summit (you are able to buy bottled mineral water at Kibo Hut).

At Kibo Hut you will be served an early dinner and should try get to bed before 19:00 as you will be awoken around 23:30 to start your 1,150 meter ascent to Uhuru Peak. Make sure that you have all your gear ready for a prompt departure, including insulated water, snacks, your headlamp and camera. 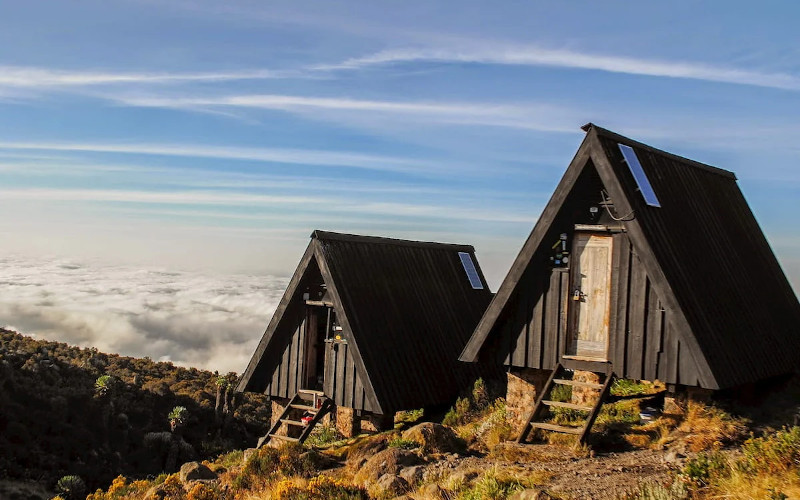 Hut accommodation on the Marangu Route

Trekking time: 6-8 hours to the summit and then 5-8 hours to Horombo Hut

Day five begins with summit night. After being awoken you will be served some hot tea and biscuits and will then begin your summit ascent.

The route follows a rocky path to the first check point, Hans Meyer Cave at 5,150 meters. It then continues to zigzag for a good 2-3 hours until you get to Gilman’s Point (5,681 meters) on Kibo’s crater rim. You will most likely be very tired at this point.

Take some time to rest and refuel with a snack. The final push is tough and requires mental stamina. Focus on moving slowly and deliberately for the final 200 meter ascent. Sunrise, with the summit in the distance. Not far to go now!

At Uhuru Peak (5,895 meters) you will not be able to stay too long so make sure to get all the pictures you want to take and then begin your descent back to Kibo Hut, and onto Horombo Hut. In total you will be trekking upwards of 12-16 hours. It will be one of the longest days of your life but well worth it! Here’s the good news, beers can be bought at Horombo!

Day six from Horombo Hut to Marangu Gate is nearly 20km but usually only takes 7 hours to complete. You will be exhausted at this stage and spend most of the hike imagining the hot shower you will be having that evening.

At Marangu Gate you will be presented with your certificate, either for Gilman’s Point or Uhuru Peak (depending on how far you managed to get).

It is customary to present your support team with their hard-earned tips at this point. You will then be driven back to your hotel where celebrations can begin!

Here's what the Kilimanjaro Marangu route altitude profile looks like.