The annual Wildebeest Migration of around 1.5 million wildebeests, zebras and antelopes is visible from space as one of the Seven Natural Wonders of Africa.

I've followed the great herds on their brutal journey north many times. It's incredible to think that some 250,000 animals are lost to predators, river crossings and fatigue during the migration every year. I also caught the wildebeest on their return to breeding grounds when half a million calves restart this circle of life in the south of the Serengeti National Park.

In this article, I'll share my best insights on the Great Wildebeest Migration and everything tourists can expect on this remarkable journey.

This article will answer all your burning FAQs on the Great Wildebeest Migration. I have also included some fun facts about wildebeest that you might not already know at the end of the article. 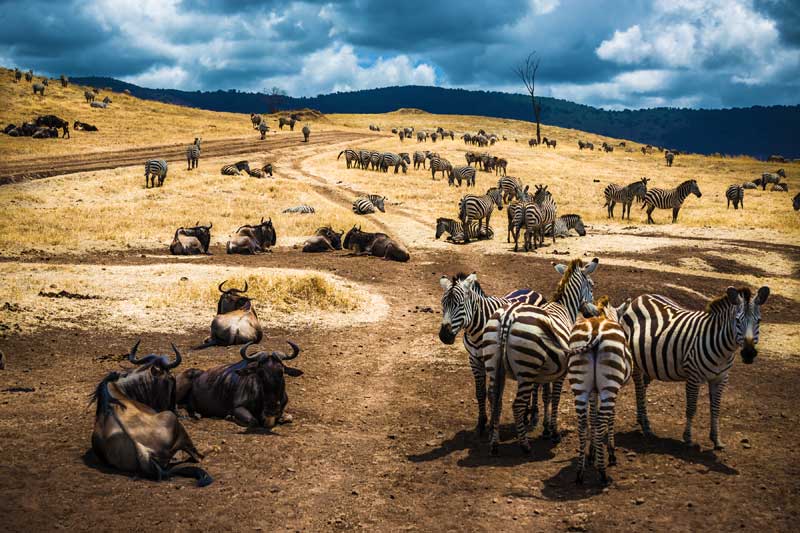 Why do the Wildebeest migrate?

Wildebeest are grazers that need good quality grasses to survive and reproduce. The Serengeti is a huge area and rains fall at different times in different areas producing nutritious grasses. Serengeti Animals must follow this rainfall to find enough food to eat. So, the large herds are constantly on the move to find food and water.

What starts the Wildebeest Migration?

The signal for herds to start their journey is the onset of rainfall which they appear to be able to sense from up to 50km away. Some research also suggests that movement may be triggered by lightning or thunder that the animals see on the horizon but this is yet to be proven.

Which tour? Here are 5 Serengeti safari tours I highly recommend:

What route do the animals use to migrate?

The wildebeest migrate in a circular route. Usually, the Calving Season (February to March) in the southern parts of the Serengeti National Park counts as the starting point, and the northern parts at the Mara River and Kenya’s Masai Mara are the endpoints when the herds start to move back down to the southern plains along the eastern sections of the park.

What animals participate in the Great Migration?

There are a number of animals that participate in the Great Migration annually, many of which are wildebeest and buffalo herds as well as some of the notable Big 5 predators.

Predators including lions, cheetahs, leopards, wild dogs, hyenas and crocodiles pick off the old and weak animals keeping populations healthy and their numbers stable. Too many wildebeests would destroy the vegetation, leaving the young and healthy to starve. 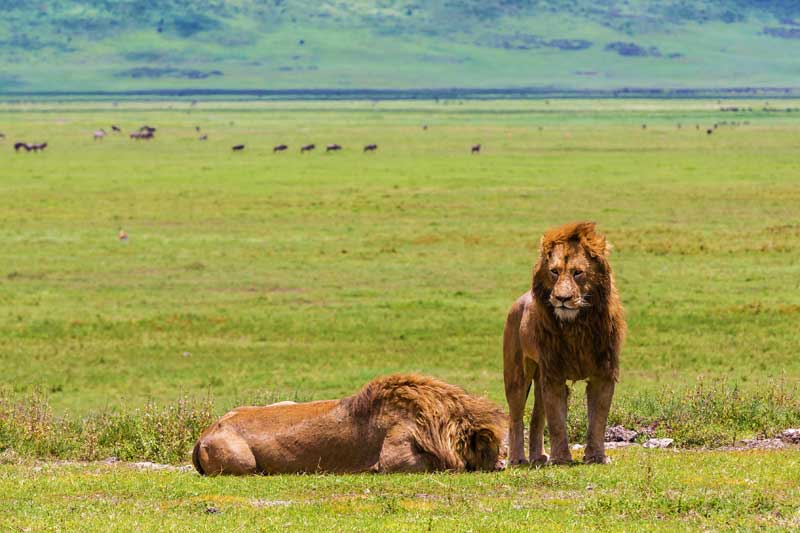 Jackals, vultures and other scavengers pick at the carcasses left behind. Maggots feeding on the carcasses are also valuable food for smaller creatures like mongooses. The decomposing matter is an important source of nutrients for the grasses. 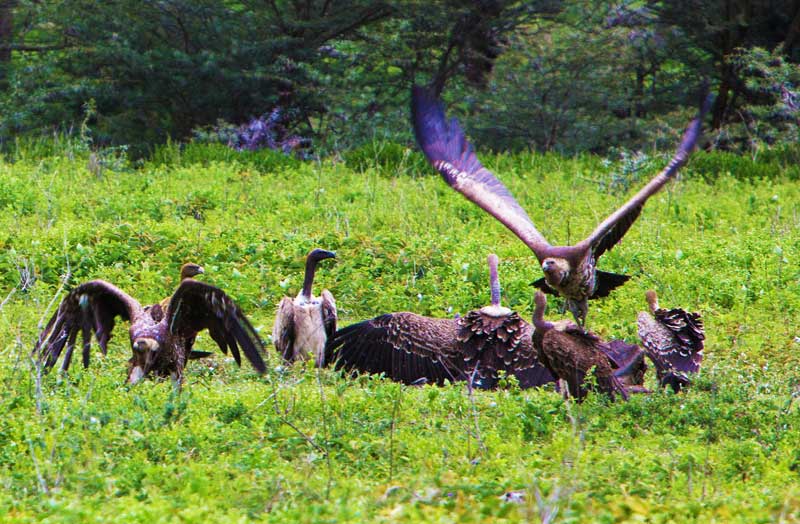 Almost 300 zebras and hundreds of gazelles travel alongside the wildebeest during the migration. These game species don’t compete for food as the zebras eat the top, tough part of the grasses, opening up the shorter grass for wildebeest to eat. They then clear the way to the young grasses which gazelles prefer. These groups of thousands of animals also leave behind droppings which fertilize the soil for the following seasons. The great wildebeest migration is the heart of the Serengeti ecosystem. Wildebeest are true grazers and prefer grassland and savannah. 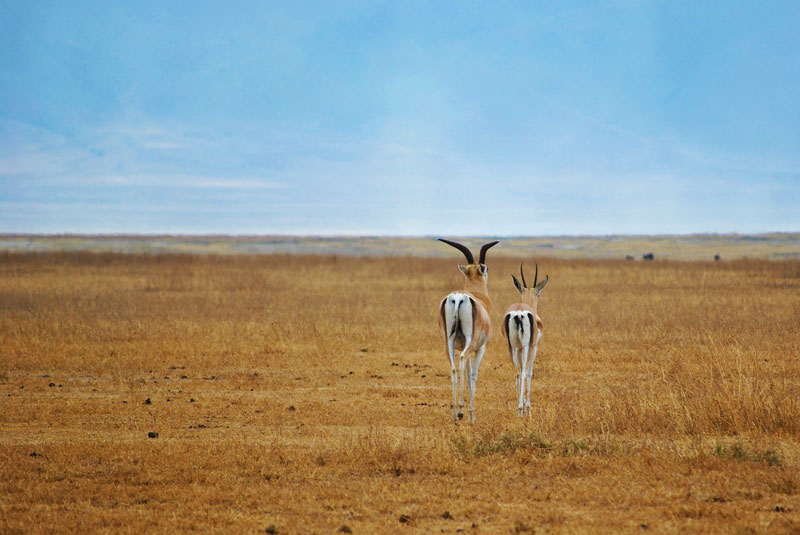 Where can I see the Great Migration?

Theoretically, you can see the Great Migration at any time. The Migration doesn’t really have a start or endpoint but is rather a circular motion going clockwise through Northern Tanzania and Southern Kenya throughout the year.

See more on our dynamic Tanzania Safari Map and the best times of year to visit Tanzania and Kenya.

The animals don’t always stick together but break up into mega-herds which take different routes to get to the Masai Mara in Kenya. Even though the direct route is 500km (300miles), each animal will journey roughly 800km (500miles) and frequently go back and forth, side to side and even remain in certain areas for days or weeks. 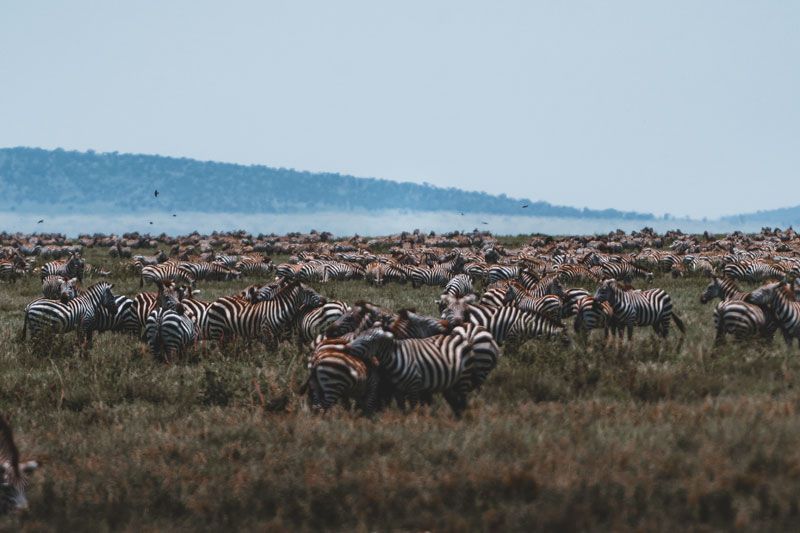 When can I see the Great Migration?

As the herds of animals are constantly on the move, the best time and place to view the migration depends on the season and what you want to see.

Generally speaking, the calving season in February-March and Crossings of the Mara River are fantastic times for your Serengeti safari.

Below is a month-by-month guide to where the herds will end up on their migration journey with a detailed description afterwards.

Animals are moving from the northeast region of the Serengeti National Park southwards towards the plains surrounding Lake Ndutu in the Ngorongoro Conservation Area between December and January.

At this time, many female wildebeest are heavily pregnant. This is a difficult time of year to predict migration movements as the animals are split into multiple large herds and moving swiftly towards the southern plains, awaiting the rain.

By January, most of the herds would have arrived at the Ndutu Plains for the beginning of the Calving Season. 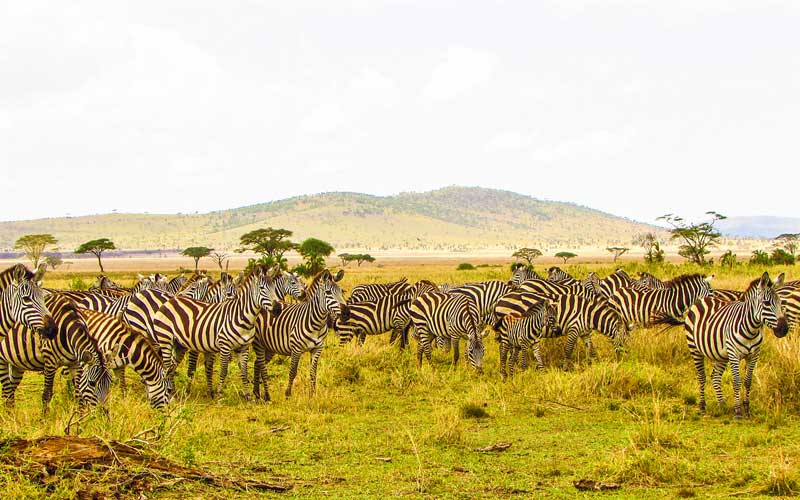 The herds are settled and grazing along the plains of the southern Serengeti. February is peak Calving Season, and the animals don’t move much to give the young enough time to grow strong before they start moving again.

This is a great time to see them. With 8,000 calves born daily (or 400,000 in a 2-3 week period), you are pretty much guaranteed to see hundreds of baby animals frolicking on unsteady legs. These youngsters also make easier hunting targets for predators, so expect to see lots of lion, leopard, cheetah and hyena stalking through the grasslands. 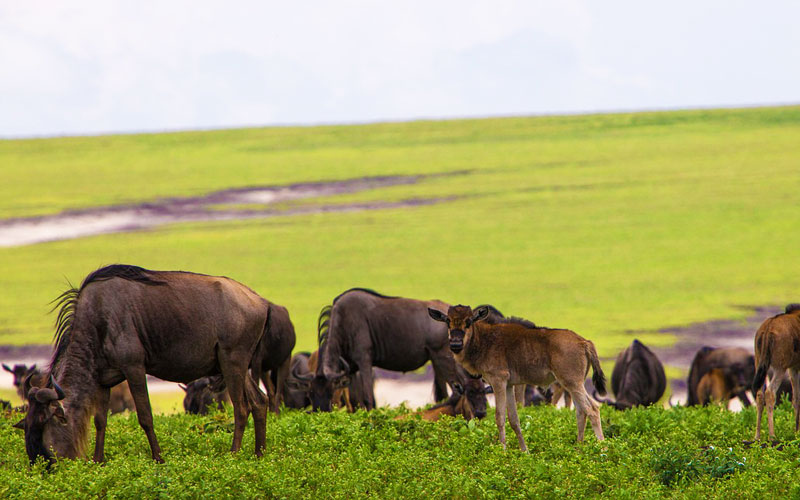 The tail end of the calving season is in March. Although some female animals are still giving birth, the majority of the calves are around a month old and more steady on their legs. Still, this is also an excellent time to catch predators on the hunt.

Please Note: Watching the wildebeest migration in the Ndutu Region in the first half of March is a good idea for visitors who want to skip ‘peak season’ here in Tanzania. You are still likely to get great sightings of abundant herds of animals and predators without the crowds and high prices of February. Sometimes, the rains come early, so be prepared for wet weather.

Mobile safari camps are a good choice from January-March as they set up close to the herds.

That way, wherever the herds go, you'll soon follow with the help of your trusty guide.

If you're hoping to catch the wildebeest migration in real time, here are some great accommodation choices in the Serengeti:

Some years, the herds remain longer in large numbers, but other herds split up earlier and start slowly heading north-west towards the Moru and Simba Kopjes* (one of the best spots to see prides of lions) in smaller groups as the calves become more mobile.

May: Beginning of the Move

The end of the long rainy season is in May. Herds are on the move! 1.5 million wildebeest, together with thousands of zebras and gazelles, are heading north in huge columns up to 25 miles (40km) long in search of water and grazing. These herds are passing through the area around Moru Kopjes and west of Seronera. The animals are moving more quickly and also take different routes, making it tricky to see the migration at times.

Herds spread out in June. Some animals move through the western corridor of the Serengeti along the Grumeti River, others head directly north passing through central Serengeti (Seronera Region).

Those to the west often congregate in this area but eventually cross the Grumeti River into the Singita Grumeti Reserves. There is an opportunity to witness a smaller river crossing here and this is also a lesser-visited part of the migration route.

June is also mating season. Males put on displays and compete for the attention of females. With lots of testosterone in the air, it’s a brilliant chance to witness interesting animal behaviour. 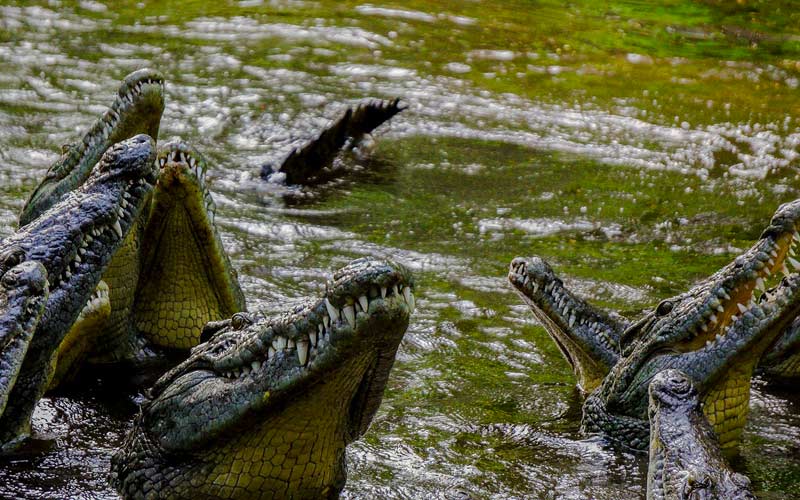 In July, the wildebeest continue northwards spread out in a wide front from the western to central Serengeti. Some of the early Mara River crossings begin at this time of year.

Read more on for how to go on a combined safari tour in Tanzania and Kenya. It's a great way to see the wildebeest migration at one of its most critical stages.

Top Tip: 80% of the Mara River flows through Tanzania on both sides of its banks. Even though many animals are in Kenya between August and October, northern Tanzania still offers amazing opportunities of seeing river crossings and big herds, while the lodges are generally quieter and running good specials this time of year.

Most of the wildebeest have reached the Northern Serengeti, Kogatende and Kenya’s Masai Mara by August through to October.

August is considered the best month for crossings of the famous Mara River where hungry crocodiles wait and serious drama ensues. The decision to cross usually comes down to one animal taking the plunge and a few thousand following. Amongst all the panic, it’s common for wildebeest to cross the river and re-cross it soon after!

Please Note: September is the best time to see wildebeest in the Masai Mara in Kenya as more than half move north over the border. However, many remain in Northern Tanzania and move back and forth following local rainfall.

November: Beginning of the Return

The short rains should begin, soaking the plains of the southern Serengeti and drawing the herds to leave the northern areas where food is running out. Wildebeest begin making their journey back south to calve and start the cycle again.

What are some interesting Wildebeest Facts?

Here are some interesting facts about Wildebeest: 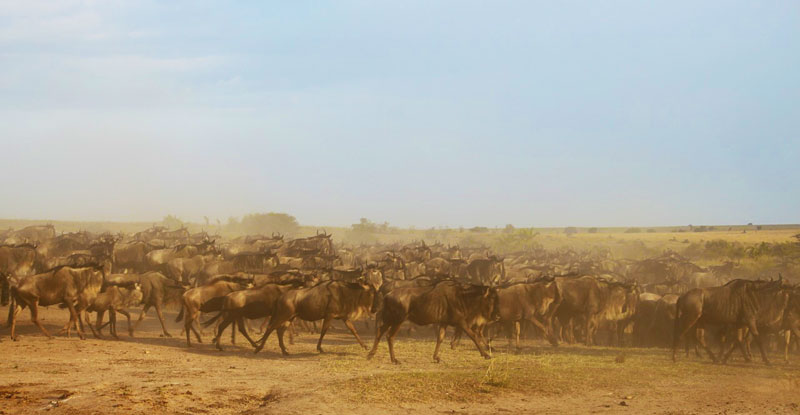 I hope this article answered all your burning FAQs about The Great Wildebeest Migration! But don't take my word for it - you too can follow this remarkable wildlife journey against all odds through the endless plains of the Serengeti.