Often considered a warm up for a Kilimanjaro trek, Mount Meru by its own right is a stunning mountain to climb.

Although standing over a 1000 meters shorter than Mount Kilimanjaro, Mount Meru is an incredible free standing volcano that offers views and wildlife sightings.

Here's our guide to Mount Meru, and how you can do a Mt Meru and Kilimanjaro adventure combo.

Where is Mt Meru?

Mt Meru is situated in Northern Tanzania, roughly 70km southwest of Mount Kilimanjaro and east of the Great Rift Valley.

Is Mount Meru a volcano?

Yes, Mt Meru is an active, but dormant stratovolcano. The same type of volcano as Mount Kilimanjaro (see how Kilimanjaro formed).

Exploding into life over 500,000 years ago, Meru’s horseshoe rim is very distinctive as the entire eastern flank was blown apart by the explosion. 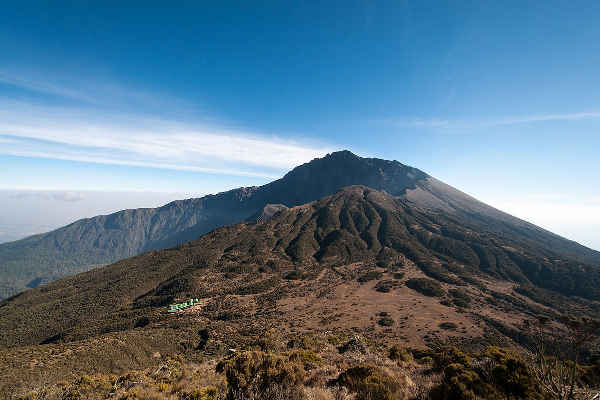 How high is Mount Meru?

Mt Meru is the fifth highest mountain in Africa (depending on your definition). Its rim lined crater extends down 1,500 meters to the crater floor making it one of the tallest cliffs in Africa.

When was Mt Meru first climbed?

Although the first accent of Mt Meru is still disputed, it is widely accredited to either Fritz Jaeger in 1904 or Carl Uhlig in 1901.

Even with its incredible views, scenery and wildlife, Mount Meru is often overlooked due to its close location to the far more popular peak, Mount Kilimanjaro.

But there are three main reasons why we think climbing Mount Meru is a great idea.

When do you get the opportunity to do a walking safari whilst hiking a major African peak?

Lying within Arusha National Park, the lower reaches of Mount Meru are amazingly rich in wildlife. You are almost certain to see monkeys, warthogs, buffaloes and a wide array of birds and, if you’re lucky, elephants and giraffes!

Because of the abundance of wildlife on and around Meru, it is compulsory to be accompanied by an armed ranger on your trek at all times.

Mt Meru offers a great way to prepare for Kilimanjaro as it gives you a little taster as to what to expect on the bigger mountain.

Most importantly though is that Mt Meru can help you acclimatise for Mount Kilimanjaro. In fact, people who attempt speed ascents on Kilimanjaro, almost always acclimatise on Mt Meru.

Do not underestimate Mount Meru though. It is certainly high enough to bring on altitude sickness.

At a height of 4,566m, Meru is a tall mountain in its own right and forces your body to make changes to adapt to the altitude. Please click here for a full guide on how to deal with acclimatisation.

Similar to Kilimanjaro, you trek the summit at night, reaching the peak just before sunrise. You then descend an amazing 2000m on the same day! All these similarities allows your body (and your mind) to prepare for Kilimanjaro.

Another bonus of climbing Mount Meru is the lack of crowds that can sometimes plague Mount Kilimanjaro. As its little known brother, Mt Meru is a fantastic way to avoid this and get stuck into a peaceful trek. 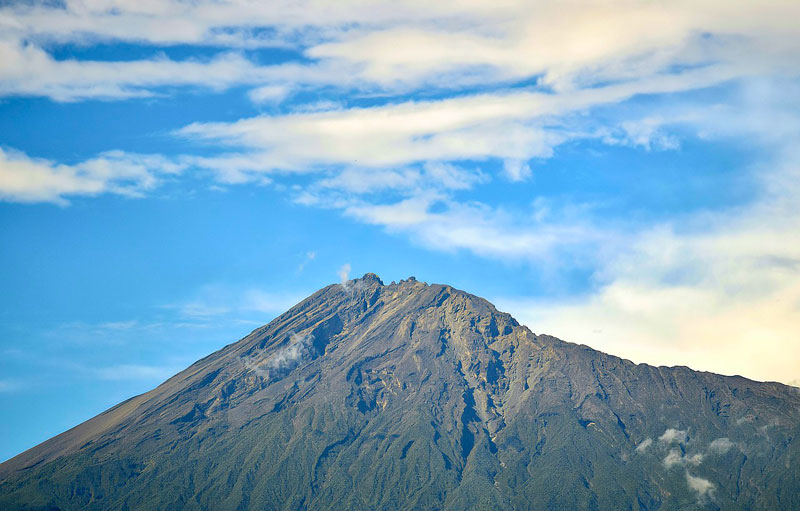 When should I climb Mount Meru?

Generally we recommend hiking between June and February. March, April and May are best avoided as these are rainy months in Tanzania.

What are the Mount Meru Hiking Routes?

Unlike Mount Kilimanjaro, there is only one official route to the summit of Meru – the ‘Momella route’ (see Kilimanjaro's routes).

What is the Mount Meru route itinerary?

Most tour operators will collect you from your hotel in the morning and take you to Arusha National Park. Once at headquarters your papers, visa and permits will all be checked and made ready for departure. From head office you will be taken by van to the Momella Park Gate from where your trek will begin. The trail starts by winding its way through montane forest where you will see waterfalls, wildlife and some pretty oddly formed trees! Remember, an armed national park ranger will accompany you on your route. The first day of trekking will end when you reach Miriakamba hut. Unlike Kilimanjaro, accommodation on Meru consists of huts dotted up the mountain.

On the second day you will ascend over a 1000m to Saddle Hut at 3,550m. The air will get cooler and you may feel slightly more out of breath as the air gets thinner. Saddle Hut will be reached by early afternoon which will give you time to visit ‘Little Meru’ at 3,820m. Not only will you get great views of Kilimanjaro, but it’s a good way for your body to acclimatise to the altitude.

Your summit ascent begins in the middle of the night at 2am. Following a quick midnight snack you trek to 3,820m where you find Rhino Point. After a quick break you then climb a further 4-5 hours where, towards the top, you will traverse the exhilarating and very narrow crater rim path! This is all rewarded as you hit the summit just before sunrise. The 360 degree views are spectacular, especially the sun rising over Kilimanjaro! Before you descend, you can explore Meru’s ash cone within the crater.

The fourth day is an easy going few hours down through the montane forest area where you will once again see wildlife and beautiful habitat. Seeing the forest from above is a completely different experience to seeing it on the way up – look out for birds!

How much does the Mt Meru climb cost?

Costs to climb My Meru vary by tour operator and group size, but you can expect to pay between $800 for a group climb and $1500 for a solo private climb.

Can I hike Mt Meru and Kilimanjaro?

Yes, if you have the time we recommend combining Mount Meru and Kilimanjaro. This way you can acclimatise for the Kilimanjaro and be almost assured summit success.