From the fastest ascent to the highest pizza delivery and even a football match – our Mount Kilimanjaro Facts won’t disappoint!

Mt Kilimanjaro has a fascinating geology. Here are some Mount Kilimanjaro facts about its geological features.

How was Mount Kilimanjaro formed?

When looking at Mt Kilimanjaro, you will see that there are in fact three peaks - Shira, Mawenzi and Kibo.

The first peak is called Shira and is the oldest. It formed around 750,000 years ago when volcanos from tectonic activity resulted in a large volcanic cone forming the now extinct Shira peak. Shira was an active volcano for around 250,000 years before collapsing to form a caldera (i.e. the large volcanic crater) one can see today. 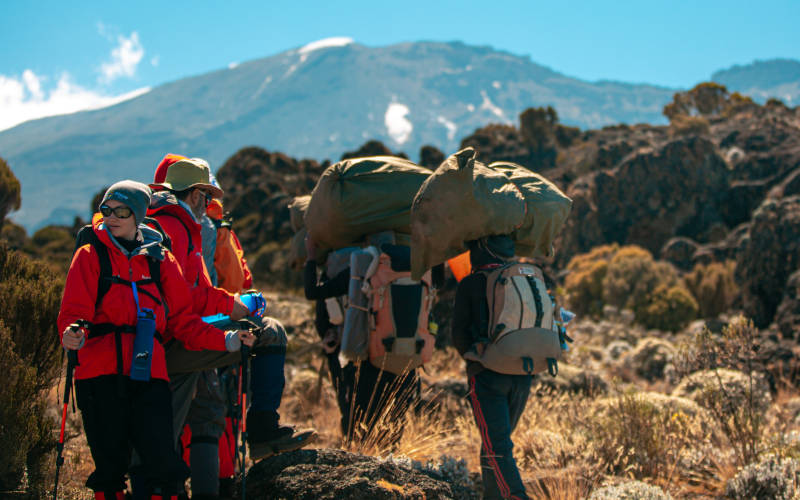 When did Mount Kilimanjaro last erupt?

As mentioned above in our Mt Kilimanjaro Facts, the mountain consists of three volcanoes – Shira, Mawenzi and Kibo.

Shira and Mawenzi are extinct volcanoes, whereas Kibo is considered a dormant volcano. The last time Kilimanjaro erupted was around 350,000 years ago, although there is evidence that Kibo has been volcanically active in the last 10,000 years.

Although Mt Kilimanjaro is considered a dormant volcano, it is possible that Kibo will experience volcanic activity sometime in the future. Don’t worry though, seismic activity on Mount Kilimanjaro is closely monitored and there are no indications that the mountain is active.

Mount Kilimanjaro consists of three volcanic cones – Shira, Mawenzi and Kibo. Shira and Mawenzi have been extinct for over 500,000 years. Kibo, although very active during its formation, is now considered a dormant volcano and is not active. The last major eruption on Mt Kilimanjaro was around 350,000, years ago. However, Kibo has been active in the last 10,000 years and may become active again in the future. For now though, Mount Kilimanjaro is not active.

What type of volcano is Kilimanjaro?

Another interesting Mt Kilimanjaro fact is that it is a stratovolcano, also known as a composite volcano. Stratovolcano's are the most common form of volcano, accounting for over 60% of volcanos on the planet, including Mount Kilimanjaro, Mount Fuji and Mount Rainier.

Why is Mount Kilimanjaro famous?

Mount Kilimanjaro is famous as it is the highest mountain on the African continent and a constituent of the world's Seven Summits (i.e. the 7 highest peaks on each continent).

It is also a very iconic looking peak as it is totally free-standing (most mountains are part of a range), and it is a volcano.

Another amazing Mt Kilimanjaro fact is that the mountain features in popular culture too. For example, Ernest Hemingway wrote a book called The Snows of Kilimanjaro, and many songs have been written about Mt Kilimanjaro, including ones by Johnny Clegg and Miriam Makeba. 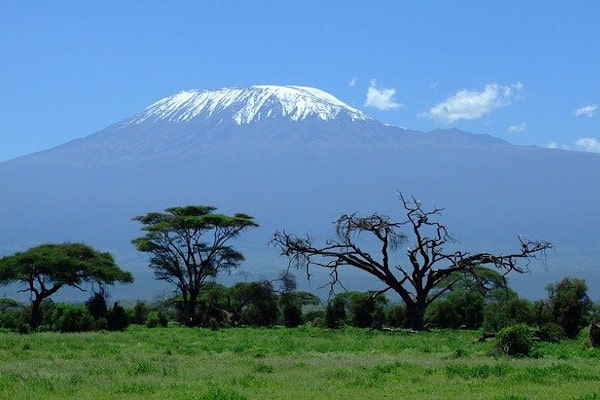 Here are some really interesting and fun Mt Kilimanjaro facts.

When was the first ascent of Mt Kilimanjaro?

German geologist, Hans Meyer, Ludwig Purtscheller and a local called Lauwo were the first people to summit Mount Kilimanjaro in October 1889. However, it is possible that Kilimanjaro’s summit was reached by locals prior to Hans Meyer, but was never recorded.

What is the fastest ascent speed record on Kilimanjaro?

The fastest ascent and descent of Mount Kilimanjaro is held by Swiss mountain runner, Karl Egloff, who ran to the top of the summit and back in 6 hours and 42 minutes in August 2014. 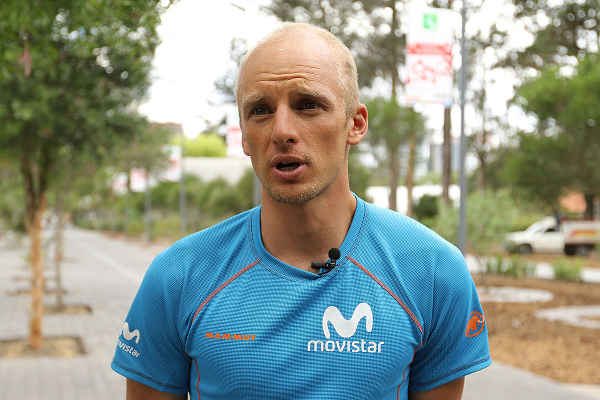 This incredible feat beat the previous record which was held by Spanish mountain runner, Kilian Jornet and set in September 2010. At the time, the Spaniard was 22 years old. He reached the summit of Mt Kilimanjaro in a record time of 5 hours, 23 minutes and 50 seconds – beating the previous ascent record from Kazakh mountain runner, Andrew Puchinin, by one minute!

He then ran back down for a total round-trip time of 7 hours and 14 minutes, beating the previous round-trip record set by local Tanzanian guide Simon Mtuy of 9 hours and 21 minutes!

Check out this awesome video of Kilian Jornet’s record ascent of Mt Kilimanjaro.

The fastest Mt Kilimanjaro ascent by a woman was held by German-born Anne-Marie Flammersfeld, who in July 2015 climbed to the top of Mount Kilimanjaro in 8 hours and 32 minutes, smashing the previous record held by Becky Shuttleworth by over 3 hours. In total it took Flammersfeld 12 hours 58 minutes to ascend and descend, breaking the ascent and descent record of 18-hour 31-minute record set by Debbie Bachmann. Read more about Anne-Marie’s record here.

In 2017, Brazilian Fernanda Maciel smashed Flammersfeld’s record by over an hour, recording an ascent time of 7 hours 8 minutes.

Amazingly, this was beaten again in February 2018 by Danish ultra-runner, Kristina Schou Madson who set an astounding record at 6 hours 52 minutes and 54 seconds.

Who is the youngest person to hike Kilimanjaro and summit?

The youngest person to reach the summit of Mt Kilimanjaro is Albuquerque resident, Coltan Tanner. He summited Mount Kilimanjaro in October 2018 at the tender age of 6 years and 1 month old. The previous record was held by Keats Boyd, who summited at the age of 7 years old.

The youngest British person ever to trek to Mt Kilimanjaro summit is Zain Akrim at 9 years of age on the 8th of August, 2015. And the youngest female to climb Kilimanjaro is 7-year-old Montannah Kenney, who broke Roxy Getter’s record, aged 8, in March 2018. 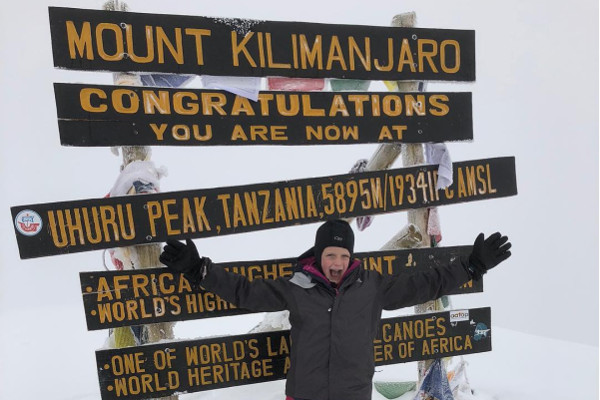 Who is the oldest person to trek Kilimanjaro and summit? 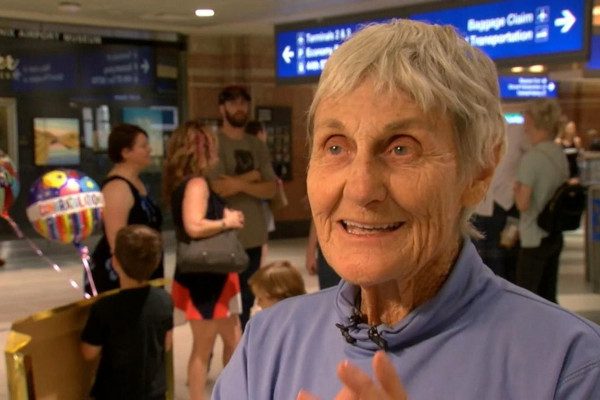 Before Anne achieved her incredible record, there were a number of other octogenarians who held the record:

There is some controversy around who is the oldest person to have reached the summit of Mt Kilimanjaro. Frenchman, Valtee Daniel, reached the summit at the age of 87; however, the climb was not independently verified and did not have sufficient documentation to be verified (i.e. logbook notes, photographs and film).

Have any disabled people participated in a Kilimanjaro hike?

Kyle Maynard, who has no arms and legs, crawled unassisted to the top of Mt Kilimanjaro in 2012. Watch this documentary about Kyle and his Kilimanjaro achievement – it’s amazing!!

Here are some more fun and interesting Mt Kilimanjaro Facts you might not have already known about.

Number of Deaths on Mount Kilimanjaro

Luckily, on average, 3-10 people die on the slopes of Mount Kilimanjaro every year. Conversely, as many as 30,000 people climb the mountain annually, which makes the odds of survival extremely high.

In September 2014, 30 cricket players and officials climbed to the top of Mt Kilimanjaro and then descended to Crater Camp to play the highest game of cricket ever recorded. The previous record was held near Everest Base Camp in 2009. Read about the highest cricket match here. 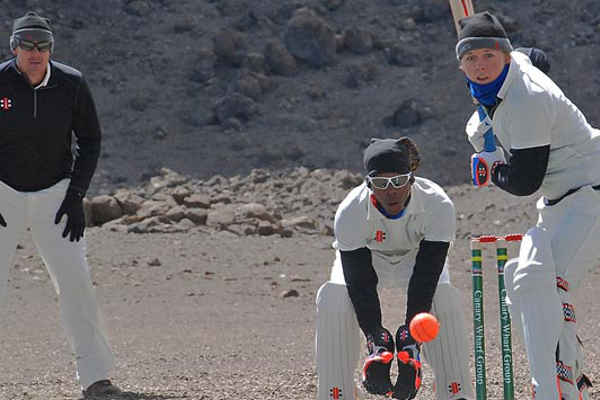 In May 2016, Pizza Hut set an official Guinness World Record by delivering the highest altitude pizza to the top of Mt Kilimanjaro. Read more about their trek and record here.

In June 2017, a group of 30 female footballers from 20 nations played the highest game of soccer on record. The game was played in Mount Kilimanjaro’s volcanic pit and lasted a full 90 minutes. An incredible achievement. To read more about the amazing record click here.

In October 2014, the Russian-backed Tour de France team, Tinkoff-Saxo, climbed to the top of Mt Kilimanjaro. Cycling stars Alberto Contador and Peter Sagan were part of the team that reached the summit. Read more about their trek here.