They came, they kicked and they conquered. A group of female footballers have just set a new record on Mount Kilimanjaro by playing a 90-minute football match at nearly 19,000 feet.

The squad of 30 footballers, which saw players from over 20 nations, included retired US international Lori Lindsey and former England midfielder Rachel Unitt. The girls not only scaled the tallest free-standing mountain on earth, but they also had to drag up goal posts and nets for their epic football match! 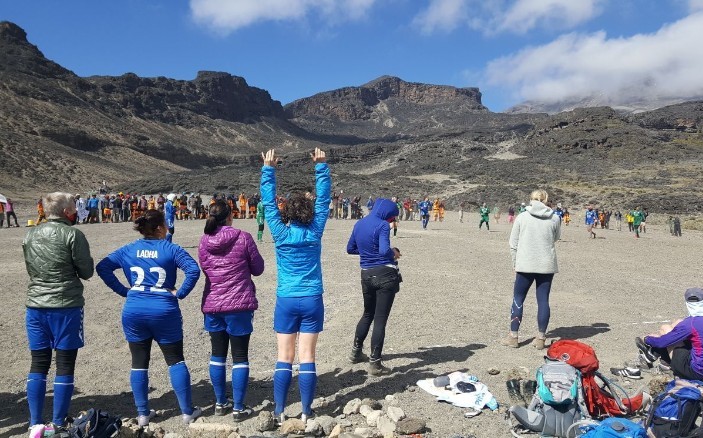 For centuries, women have climbed metaphorical mountains for the right to compete, pushing traditional sporting boundaries. However, for many women like Lori Lindsey, inequality in football games still rage on. This long standing fight for equality is what pushed the girls to climb Kilimanjaro and break the record for the highest ever game of competitive football played.

Over the course of a week, the girls made the gruelling 5,895 meters (19,347 feet) climb before descending down to 18,799 feet for the record setting football game. The teams used flour to mark the pitch lines and then used trekking poles as the corner flags. The footballers ranged from 18 to 66 years old and all managed to push through the gruelling weather conditions on the volcanic ash pitch.

The football game was played between Volcano FC and Glacier FC. It ended goalless; however, the score was immaterial as the woman were there to raise awareness and highlight the inequality between male and female sports. The American defender and co-founder of event organisers Equal Playing Fields, Erin Blankenship, said: “You can’t challenge the fact that you’ve got a group of athletes who are playing at almost 19,000ft. It doesn’t matter what gender they are.” 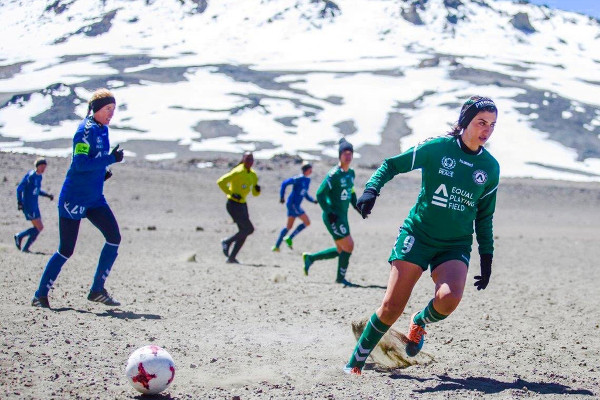 When discussing the issue of inequality in sport, Lindsey, who played football for the USA at the London Olympics and 2011 World Cup stated to CNN that “I’m fortunate enough to have had pioneers who came before me, but it’s our responsibility to continue to make strides forward for the generations to come”.

Whilst many of the girls, including Lindsey, undertook no special preparations, the teams knew the task would not be an easy one. Playing sport, particularly football, and exercising at high altitude significantly reduces physical performance and can often be exceptionally dangerous due to altitude sickness and lack of acclimatisation. In 2007, FIFA – football’s world governing body – introduced a ban (which was revoked the following year) on international matches being held above 8,200ft. The ban came to fruition following a high altitude football match at 12,467 ft. (3,800m) in which several players required oxygen.

Glacier FC coach said “We made a pact before the game that it was all about the game finishing. It was all about equal opportunities and we termed the substitutes coming on as record makers as they’d be the ones pushing us on because you could see players dropping and needing oxygen towards the end”. The woman are now hosting sport clinics to continue to raise awareness for sporting equality.

Kilimanjaro also played host to the highest ever cricket and rugby matches in 2014 and 2015 respectively. The question now is this - which sport will be next?