Aaron Anderson and the challenges he faced climbing Kilimanjaro

Aaron Anderson, a Swedish man who lost both his legs to cancer, has just scaled the summit of the tallest free standing mountain in the world – Kilimanjaro. Not only did Aaron Anderson complete the feat unaided, he did so by crawling.

Understandably, the route took the Swede slightly longer, reaching the summit in 9 days instead of the normal 6. The journey began for Aaron Anderson on a specially designed tricycle in which he rode to Kibo Hut before continuing up the mountain by crawling.

“He scaled the mountain on a little bicycle to Kibo Hut (4,700 metres above sea level), but from there he started crawling like a snake, utterly refusing to use his tricycle,” said Mr. Anderson’s tour guide, Mr. Honest Minja. 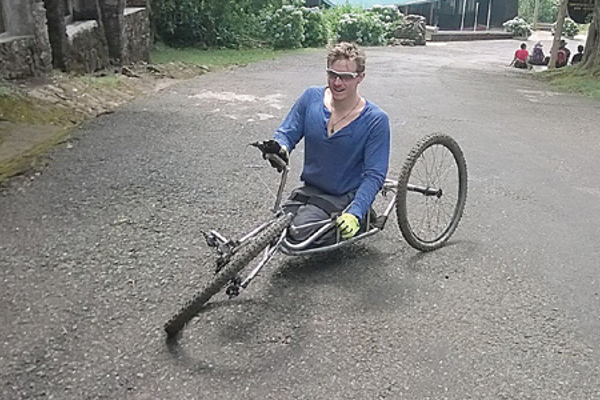 Aaron Anderson and his night on Kilimanjaro

Aaron Anderson, whose dream has long been to climb the world’s seven summits, decided to stop and sleep at Stella Point when exhaustion overcame him (5,700 metres above sea level). This is usually not advised on Kilimanjaro due to acclimatization issues, however, the team gave Aaron Anderson permission and allowed him to stay there to rest the night.

“He covered himself with many special blankets and on the following day, he went on until he reached Uhuru Summit. The joy he had was extraordinary,” Mr. Minja stated.

After completing the incredible feat, Aaron Anderson stated that his experience was sufficient evidence that people with disabilities world wide could also do it and that disabled people should not be stigmatised. The Swede now wishes to become an ambassador for the mountain and hopes to attempt further summits around the world.

Aaron Anderson also climbed Kilimanjaro to raise money for a children’s cancer charity in Sweden. A website has been set up and so far, the climb has raised well over the initial 500,000 Kr that was asked for. Aaron Anderson says he is now hoping to double the initial sum to 1,000,000 Kr.

If you would like to contribute to this amazing cause, please visit the website here. Or, visit our climb Kilimanjaro for charity page.

Best of luck to Aaron Anderson in his further climbing endeavours!