The fastest female speed record on Mount Kilimanjaro is held by Danish ultra-runner, Kristina Schou Madson, who in February 2018 set an astounding record at 6 hours 52 minutes and 54 seconds (ascent only).

You can read more about Madson's record here.

Prior to Madson's record time, in 2017, Brazilian Fernanda Maciel recorded an ascent time of 7 hours 8 minutes.

And prior to this record, German ultra runner Anne-Marie Flammersfeld set a record time of 8 hours and 32 minutes to reach the top of Kilimanjaro.

Note: The fastest ascent of Kilimanjaro is currently held by Karl Egloff, who in 2014 set an ascent and descent record, in a mind-blowing time of 6 hours, 42 minutes and 24 seconds. Read more here.

Flammersfeld, a sports scientist by profession, used the shortest and steepest Kilimanjaro route for her 2017 record attempt – the Umbwe Route, which is around 30km in length and 4,200 meters of positive height.

“This route is mandatory if you want to set a new record,” says Flammersfeld.

Starting in the rain forest, the Umbwe route turns quickly into alpine terrain, with the last 1000 meters having to be climbed on rocks.

Flammersfeld started at 5:20 am in the complete darkness of the rainforest. The first stage and second stage of the climb from Umbwe gate to Umbwe Cave Camp and onto Barranco Camp went extremely well for the UVU athlete.

“I ran surprisingly fast on the first 2000 meters and was delighted when I passed halfway mark after 3 hours and 30 minutes.” said Flammersfeld. “From Barranco Camp at about 3900 meters to Arrow Glacier Camp at 4900 meters I could feel the thin air for the first time and I slowed down a bit. When I reached the 5000 limit the altitude hit me in a brutal way. Every step was tedious and the altitude was just extremely stressful”. 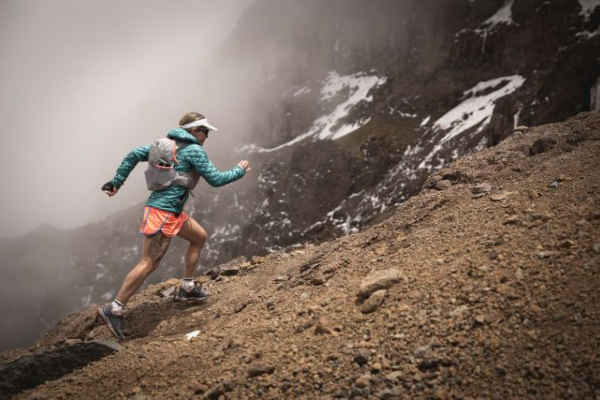 The last few kilometers were not easy for the sports scientist, each step had to be carefully considered and after every 100 steps Flammersfeld said she had to rest to drink and breathe.

At 1:52pm the ultra runner reached the summit and set a new female speed record on an ascent on Kilimanjaro (as per above, this has now been broken).

She jubilantly expressed her feeling: “When I finally reached the summit, I was overjoyed, but also wanted to run down as soon as possible!”.

Her decent down to Mweka Camp took 4 hours and 26 minutes, undercutting the previous female ascent and descent record held by Debbie Bachmann (18h31min).

Flammersfeld was supported by a team of guides from Trekili who were waiting respectively after 1,000 meters above sea level at the camps to supply her with water and some food.

Flammersfeld acclimatised for the speed run a few days previously by reaching the summit of Mount Kilimanjaro in four days over the Umbwe route along with two Italian friends, Giuseppe Milanesi and Alessio Piccoli. Together they did the “Bottom Up Climbs Seven Volcanic Summits” project. The project aims to achieve the highest volcano summit on every continent.

Anne-Marie Flammersfeld is the first woman to win the “Racing the Planet 4 Deserts Series”, where she ran 250kms through the driest, windiest, coldest and hottest desert on earth. Flammersfeld is also an ambassador for the Foundation Paulchen Esperanza, which helps disadvantaged children in Argentina, Tanzania and Sri Lanka.