Kilimanjaro Drone Makes A Successful Ascent To The Summit

We often get asked: can you use a drone on Mount Kilimanjaro?

Unfortunately, you are not allowed to use a Kilimanjaro drone without first getting special permission from the Kilimanjaro National Park authorities.

Some people have clearly got that permission for a specialised Kilimanjaro drone. For example, here is an awesome video that includes lots of drone footage from Mount Kilimanjaro.

The first ever Kilimanjaro drone

And here is a story behind the first Kilimanjaro drone to fly near the summit.

A quadcopter, a drone with four rotor blades, has made it just shy of the peak of Kilimanjaro.

The quadcopter Kilimanjaro drone was specially built by Cheetah Air to record the progress of a team that climbed the mountain from February 17 to 25, 2015. The company’s chief technology officer, Edan Cain, assembled two drones on-site, having brought the components in his backpack.

The sponsored climb accompanied by a Kilimanjaro drone flying overhead was for the benefit of Duskin & Stephens, a charity that assists the families of fallen special forces members. The charity is named after two special forces soldiers killed by small arms fire in Afghanistan in 2012: Chief Warrant Officer “Big Mike” Duskins, who died aged 42, and Sergeant First Class Riley Stephens, who perished at the age of 38. 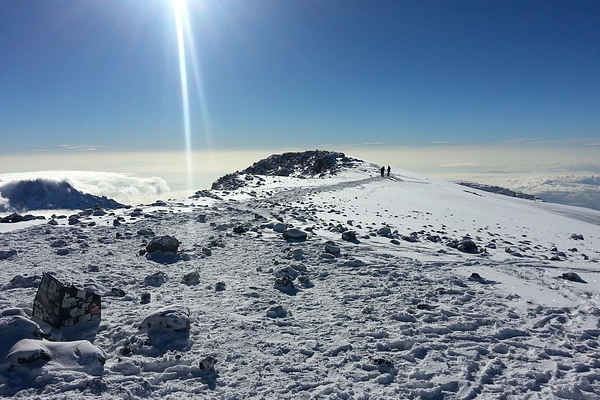 The Kilimanjaro drone reached 19,000 feet, close to the summit – Mount Kilimanjaro is 19,341 feet. While it had been intended that it would reach the summit, this was not attempted because, in Cain's words, the weather took a turn and “the winds had really picked up.” His defence was that “This was truly the case of ‘discretion, which is the better part of valour.’”

What the future holds for the Kilimanjaro drone

Beyond supporting the climbers, Cheetah Air performed groundbreaking high altitude research amidst 30mph winds and a temperature of five degrees Fahrenheit. Cain expounded, “We went knowing that the drones would be taxed to their limit and beyond in this rugged environment.” He was pleased by the results: “To see it work, and work well, considering the highest we had tested it in California was 9,500 feet, was hugely exciting,” He informed the world that Cheetah would return with “an even more powerful craft and Mother Nature’s support” in the future.

The company declared that lessons learned from this Kilimanjaro drone endeavour had been invaluable, bringing it closer to its objective of using quadcopters to send medicine to climbers in need and assist search-and-rescue operations. Other applications for drones include pipeline monitoring, precision agriculture and product delivery.