Camels Atop The Majestic Roof Of Africa – An Epic Journey

Far from the desert sands, a group from the United Arab Emirates have been the first to tackle Africa’s highest peak - with camels.

More often than not, most records associated with the UAE have something to do with tall buildings. Not this time. Mohammed Majrin, a self-proclaimed adventurer from Dubai who runs the organization ‘Emirates Travellers’, hatched a plan to put his country on the map for something other than engineering.

With over a 160 words in Arabic to describe a camel, the creatures play an incredibly important and symbolic role within the Emirates culture. Therefore, the attempt to scale Kilimanjaro with camels was very much a symbolic mission for the team who wanted to be the first to summit the mountain with their desert-loving animals.

How camels were eventually allowed to ascend Kilimanjaro

Not surprisingly, the first hurdle came when Tanzanian authorities initially refused to permit an animal to accompany the expedition – let alone two full sized camels! In pragmatic fashion, Majrin and his colleagues contacted the Crown Prince of Dubai to persuade the reluctant officials. As a man of action and adventure himself (see photo), the Crown Prince quickly secured the team permission, giving them just 3 weeks to prepare for the attempt.

Majrin enlisted the help of Saeed Al Memari, the first man from the UAE to summit Everest, and Ahmad Al Qasimi, a retired military man from Yemen who received Majrin’s attention with his quest to become the first person to cross Africa entirely by camel. 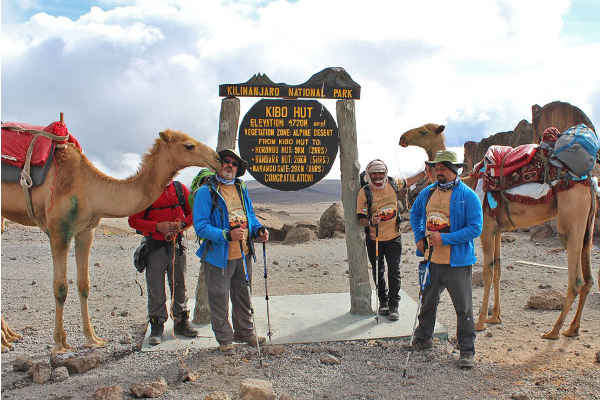 What happened with the camels on this incredible journey

The 10 day expedition took place in December and, by all accounts, was not easy going. Freezing temperatures and a lack of oxygen made life difficult for the team as Majrin recalls “even for us, it was hard breathing and there was snow, but we took care of the camels to protect them from the cold”.

Being the top priority, the camels were only ridden for parts of the journey as the steep route was often difficult for their long and gangly legs. This was even truer of the descent as the animals often had to be helped significantly by the guides and porters. “When we reached the top, we didn’t celebrate too much as we knew that going back down wouldn’t be easy because the camels have long legs”.

The tremendous effort paid off as the entire expedition arrived back safely at base with no injuries reported. “It was a unique experience and a really nice feeling to make it,” says Majrin.

“We didn’t think it would be so difficult, but when you do a trip, it is in your blood, even if you think you should stop.”

The trip was hailed as a success by people back home and by Travel Expeditions. If you would like to see more on the expedition, a recent documentary entitled ‘Climbing Kilimanjaro by Camel’ documents the entire journey undertaken by the team.