Farrokh Bulsara, aka Freddie Mercury, was born on the 5th of September in 1946, in Zanzibar Government Hospital.

Little did the hospital staff of this humble facility know that this man would later go on to shape rock music as we know it today.

Mercury’s parents had lived in India for most of their lives and could trace their ancestry back to Persia as followers of the Zoroastrian religion, otherwise known as Parsees.

His father, Bomi Bulsara, was born in Gujarat, India and had moved to Zanzibar with his wife, Jer, to take up a position as a cashier in the High Court. Six years after their firstborn, Farrokh’s birth, they had a daughter, Karishma.

Let’s look at the Zanzibar Freddie Mercury life chapter – ‘I’m not going to be a star, I’m going to be a Legend’ in this article.

Most tourists to Stone Town, Zanzibar, would not be expecting to bump into the Mercury house in the mazy streets of the UNESCO World Heritage Site.

The site is in fact the world’s first Zanzibar Freddie Mercury Museum, on a small African island of all places.

Let's look more at Freddie Mercury and his formative years spent in Zanzibar.

Zanzibar is known for being quite a conservative Islamic region and the fact that Mercury so openly flaunted his bisexuality has brought some outrage from Muslim groups in the past. One particularly controversial incident saw a group of homosexual tourists travelling to the archipelago to celebrate what would have been Mercury’s 60th birthday. 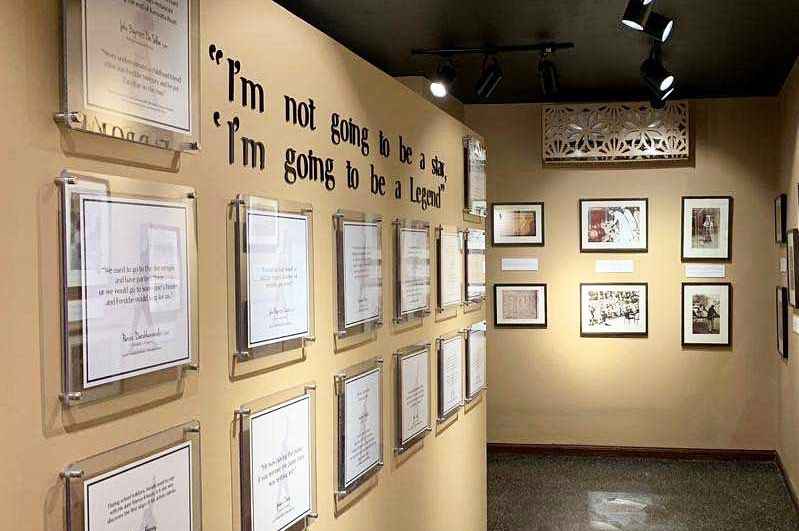 Sexual relations of a homosexual nature were actually made illegal in Tanzania in 2004 but despite this fact, the nation still remains incredibly proud of the megastar and he is revered throughout Zanzibar.

The Bulsara family’s flat was situated in a fairly affluent part of Stone Town and sea views could be enjoyed through the comfortable flat’s windows. Despite Bomi being a civil servant and earning a modest wage, the family still managed to employ domestic workers and a nanny called Sabine. 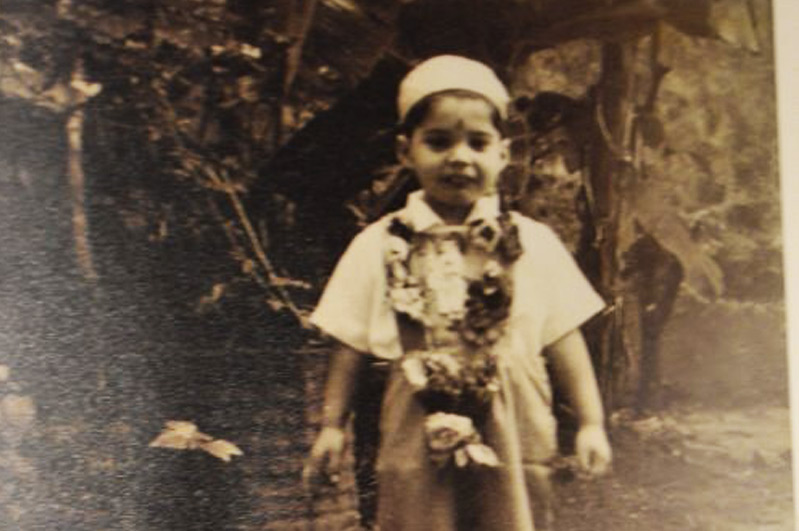 Mercury’s first few years of school were at the Zanzibar Missionary School. Here he was under the tutelage of Anglican nuns and part of the reason why his family may have sent him to a school in Bombay when he was eight where he was allowed to practice his Zoroastrian faith. It was in Bombay that his friends gave him the name Freddie and where he joined his first band, ‘The Hectics’.

Legend has it that Mercury’s first delve into the musical world was when he sang in Stone Town’s Zoroastrian temple as a child. The ancient Persian religion once had over 300 followers in Zanzibar but now the temple has long since been abandoned. 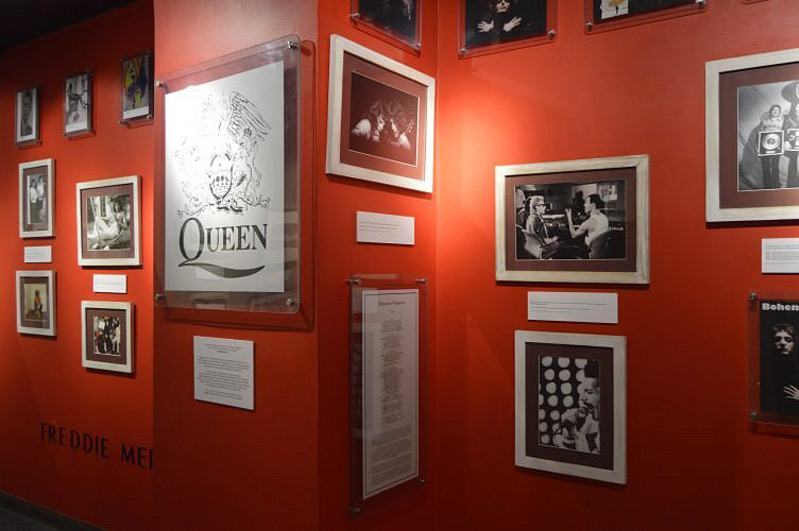 Mercury would visit Zanzibar during his school holidays and made a permanent return to Zanzibar in 1963 to finish off his schooling at the Roman Catholic St Joseph’s Covenant School. In biographies written about the Queen front man, his friends knew him as someone who was almost always smartly dressed yet loved to have fun with them after school, swimming in the sea and riding bicycles.

After gaining its independence from Britain in 1963, Zanzibar entered a period of unrest in 1964 when thousands of people were killed during a revolution to overthrow the Arabian elite who were ruling at the time. The violence saw many flee the islands, including the Bulsara family, who fled to the UK, ending Mercury’s time in Zanzibar at the age of 18. He would never return to the land of his birth.

The Mercury House in Shangani Street lies nestled in the labyrinth that is Stone Town. The journey to the house takes you winding through dark, narrow alleyways, a true journey back in time. The apartment’s centrepiece is an old black piano that no doubt was once graced by the fingers of a prodigiously talented young boy. Old photographs and newspaper clippings are strung along the walls with one of the highlights being a rare childhood photograph of Mercury on his fourth birthday.

Initially opened as a curio shop in 2002 by Javed Jafferji, the house would go on to be transformed into a museum on the 28th anniversary of Mercury’s passing in November 2019. The museum pays tribute to Mercury’s art and music and delicately steers clear of some of the shadier areas of his past. Locals celebrate him for the talented man that he was and their love for him is evident in the way his memory endures in Stone Town.

The museum was created with the help of Queen Productions Ltd and valuable insight from family members including Freddie’s sister Karishma have enabled the museum to accurately portray the singer’s life. 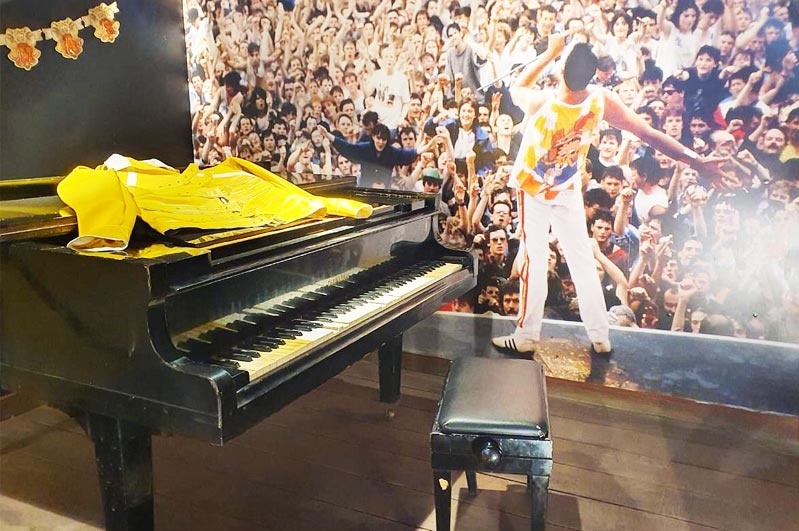 Mercury’s upbringing in Zanzibar was not something he would often speak about openly but that has not deterred the tourism industry in Zanzibar from cashing in on his heritage. Fans of Mercury can take a tour of Stone Town and trace his steps through the town as a child. The tour includes a visit to his family home, their place of worship and the courthouse where Bomi, his father worked.

Stone Town has also cashed in on its link to the world-famous superstar and travellers can visit the Freddy Mercury restaurant and gift shop. The Mercury Bar is a vibey, lively spot that perfectly encapsulates the zest for life that Mercury had, while still incorporating the cultural heritage of the island perfectly. The now-abandoned Fire Temple where Mercury was inducted into the Zoroastrian faith also forms part of the tour. 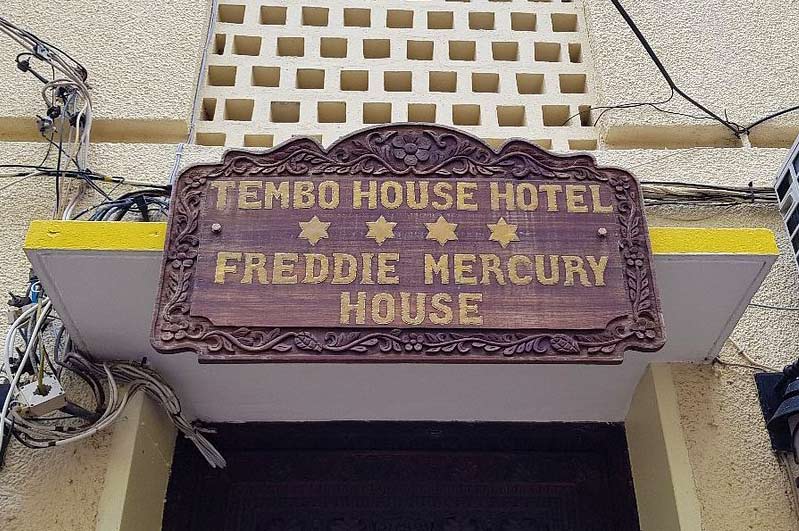 While there is some debate as to whether the official Mercury House was in fact his family’s actual residence, there is no doubt that Mercury graced the streets of the bustling capital of Zanzibar. There is a sense of mystery about Mercury’s past in Stone Town and following in his footsteps leads guests on a magical journey.

Discover more interesting facts and information about Zanzibar in our other travel guides: