The First Ever BASE Jump From Mount Kilimanjaro

50-year-old Valery Rozov, a Russian, was already the stuff of legend, having made over 10,000 jumps that include one of 23,687 feet from the Changtse massif of Mount Everest in 2013, the highest-ever BASE jump.

He has now done the same from Mount Kilimanjaro, the highest free-standing mountain in the world.

Rozov’s expedition began on February 4 2015, as February is one of the better months in Tanzania and BASE jumping requires perfect weather conditions. The athlete, sponsored by Red Bull, ascended Uhuru, Kili’s highest peak, which took five days. Rozov explained that his main problem was then finding a vertical wall from which to leap. An entire day was spent looking for such a place. The next day was too windy and cloudy, so he jumped only on the third day, when there was a small window early in the morning – usually, Kili is surrounded by clouds. 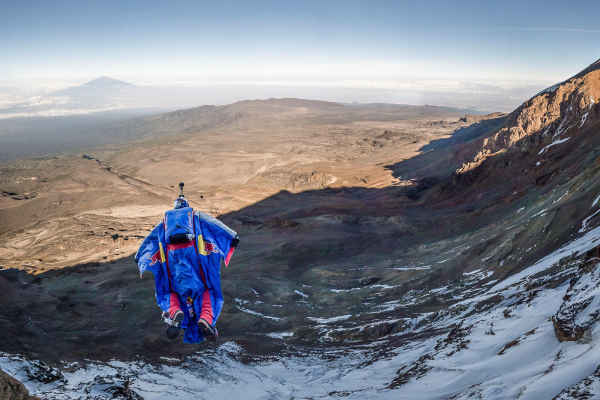 Rozov jumped from Kili’s Western Breach Wall at 17,913 feet, just under 1,500 feet from the summit. A Gopro camera was attached to his helmet with the footage subsequently posted to YouTube. He glided for a minute using a wingsuit, covering almost two miles horizontally, and then opened his parachute.

A wingsuit is an outfit with fabric between the legs and under the arms which produces a dramatic increase in lift. One was first used in 1912, although the wearer, Franz Reichelt, who jumped from the Eiffel Tower, died from a heart attack in the process, which was caught on film. Wingsuits were developed commercially in the 1990s,

Rozov landed at Barranco Camp, almost 5,000 feet below, and, to his surprise, was congratulated by a mob of hundreds: “The locals had heard what I was up to and were pretty impressed.”

More than a year of preparation had been required. Immediately after his stunning deed, Rozov remarked, “It’s a special feeling when you’re successful, as you can imagine. I’m very excited to have made it.” He later added, “Only when I got back home did I see how hard it was for me both physically and psychologically.” He had contemplated such action since climbing Messner’s route on the Western Breach Wall two decades back.

Rozov was the World Champion in sky-jumping in 1999 and 2003, the European Champion and World Cup winner in 2002, the X Games Champion in sky surfing in 1998 and the Champion of Russia in mountaineering in 2002 and 2004. He has made BASE jumps on every continent. Antarctica was done in 2010 when he jumped from the mountain of Ulvetana, which went unclimbed until 1994. He is happiest spending time at home with his family.